Sharing Our Expertise: ISB Educators Itzel Mendoza & Karina Bustamante on the Role of Inquiry in Learning a Language

This November, Spanish Nursery Head Teacher Itzel Mendoza and 5th Grade Spanish Head Teacher Karina Bustamante traveled to Santa Fe, New Mexico to present at La Cosecha, the largest dual language education conference in the country. We sat down with them to hear more about their presentation topic, their educational philosophy, and the value of inquiry in second language learning.

You both recently presented at La Cosecha Dual Language conference. Can you tell me more about what your presentation was about?

I: Our presentation was on how inquiry can really help to develop and build academic vocabulary in a second language. One of the struggles for second language teachers, regardless of whether or not it is an immersion environment, is how to build academic language. Students have an easier time learning functional phrases. They can learn to say basic things, but how do you get the academic language to stick and how do you get your students using it?

What do you mean when you refer to academic vocabulary?

I: This often refers to unit vocabulary, words that you will find often in nonfiction works, such as informational text. This is the kind of vocabulary that you develop because you are reading more informational texts or doing research, and this sort of language is required for high-order thinking. A lot of children will probably not be using this sort of language on their own, native speakers or not. Kids probably will not do this on their own unless it’s a topic they particularly love.

What’s an example of how this academic vocabulary is built in Preschool?

I: For example, this year as part of the Pre-K 3s Who Am I? unit, we watched a video about the major body parts. Of course, the children have a notion of what body parts we have, but this video used the words head, trunk, and extremities (cabeza, tronco, extremidades). Throughout the unit, we kept using these same vocabulary words when we would talk about our bodies, draw our bodies, or do an activity related to the body, and the vocabulary stuck - the children have been using it on their own - because they were engaged during all of these activities. 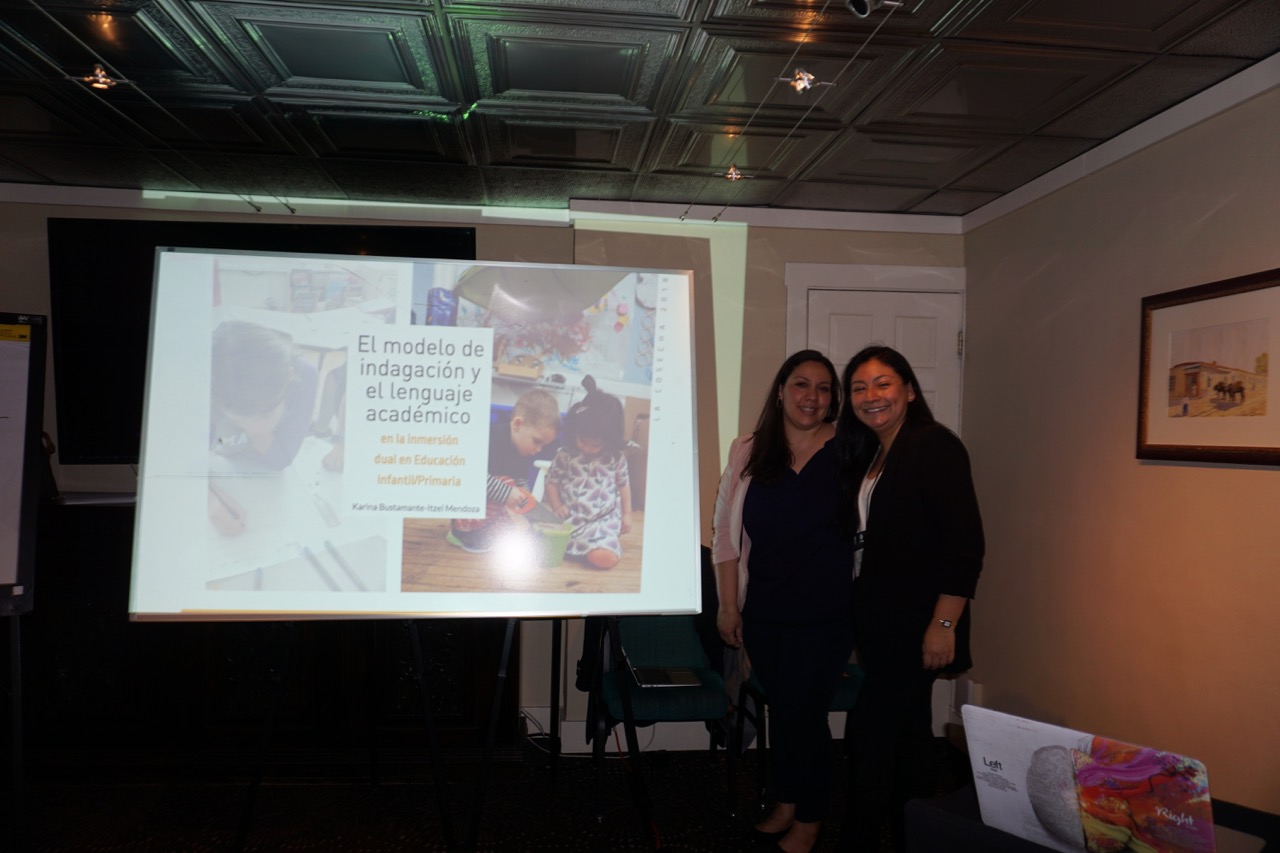 "We believe that there is so much that we do here at ISB because of the way that we marry inquiry and language, and the way that we put children at the center of their own learning."
-Itzel Mendoza 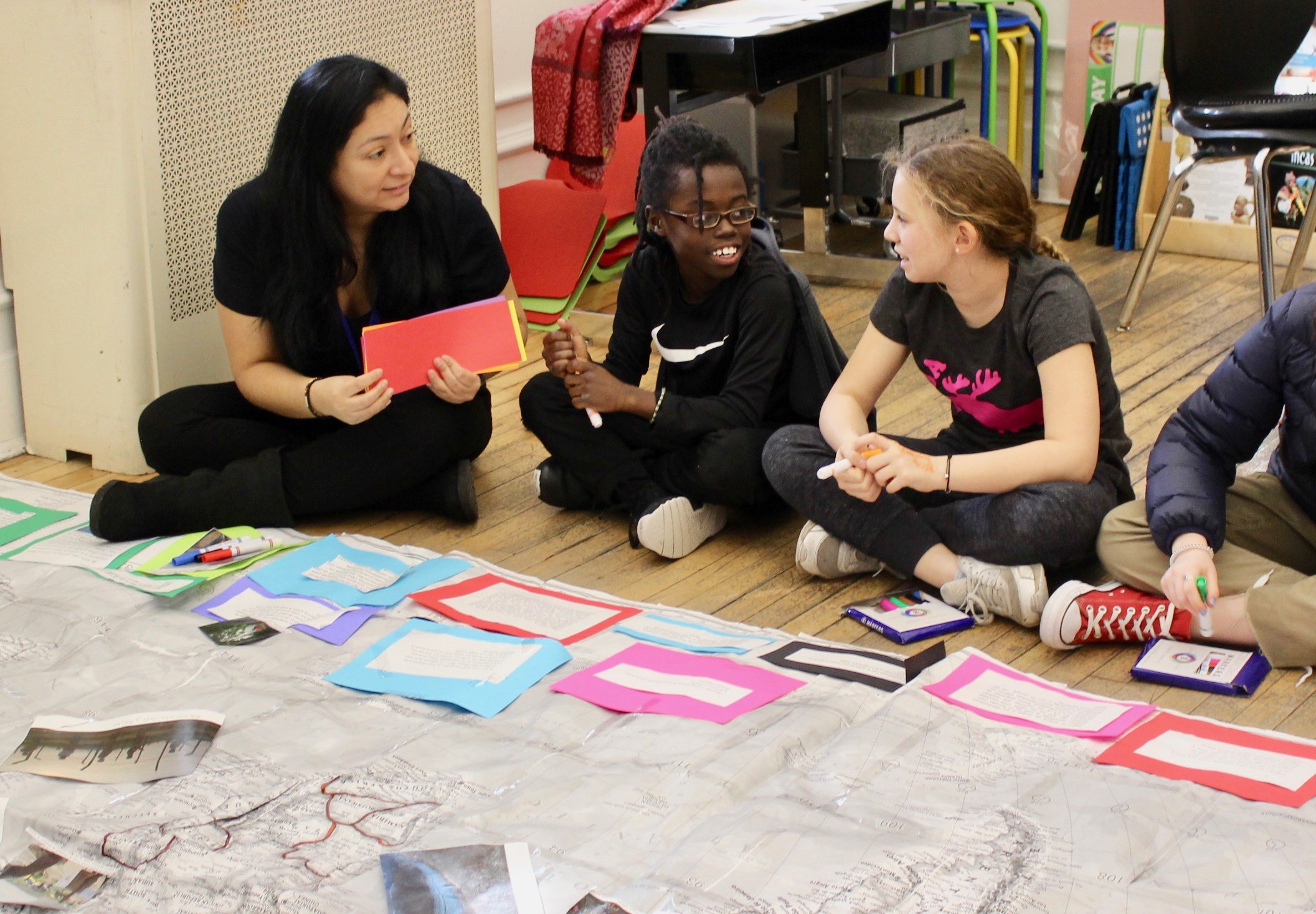 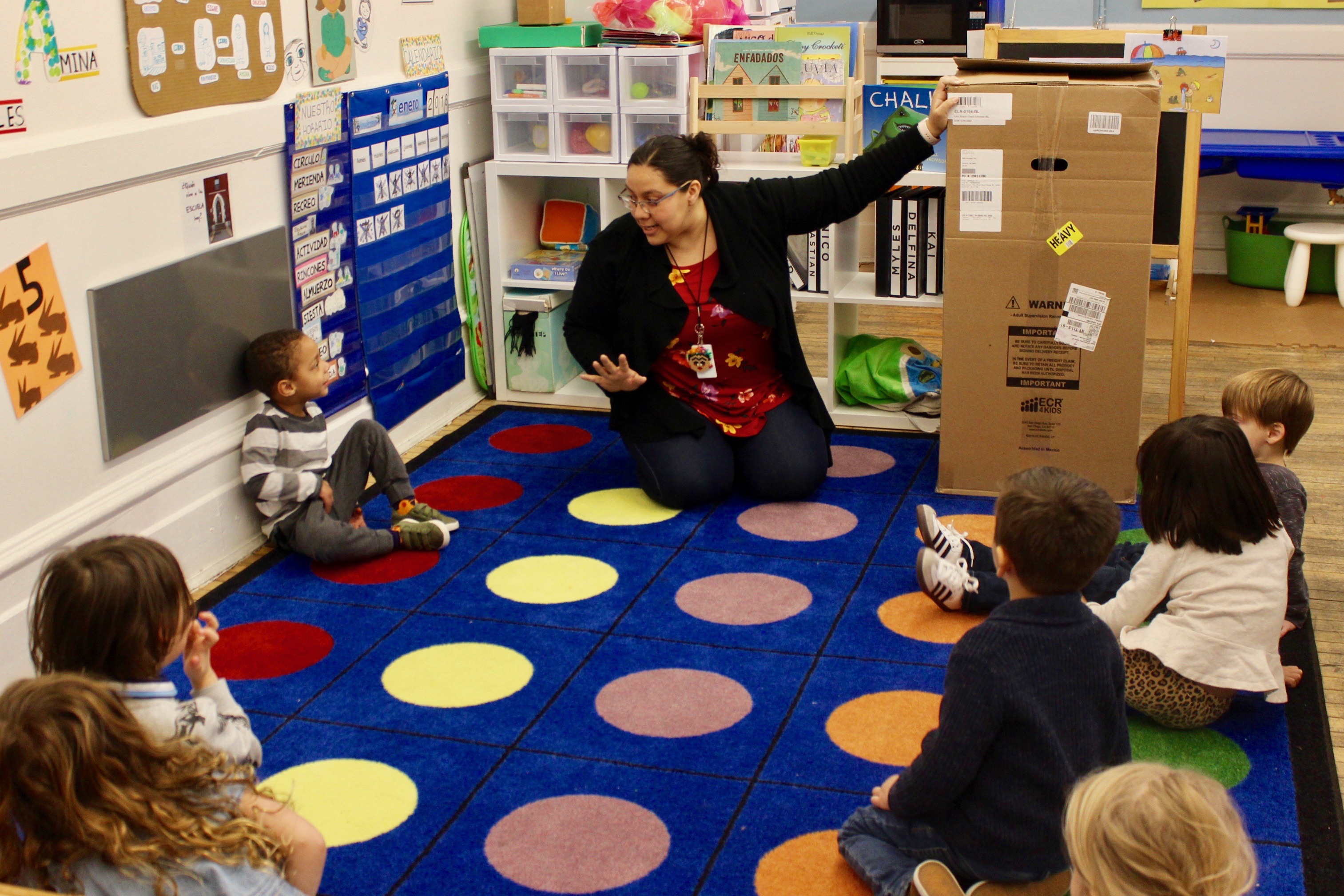 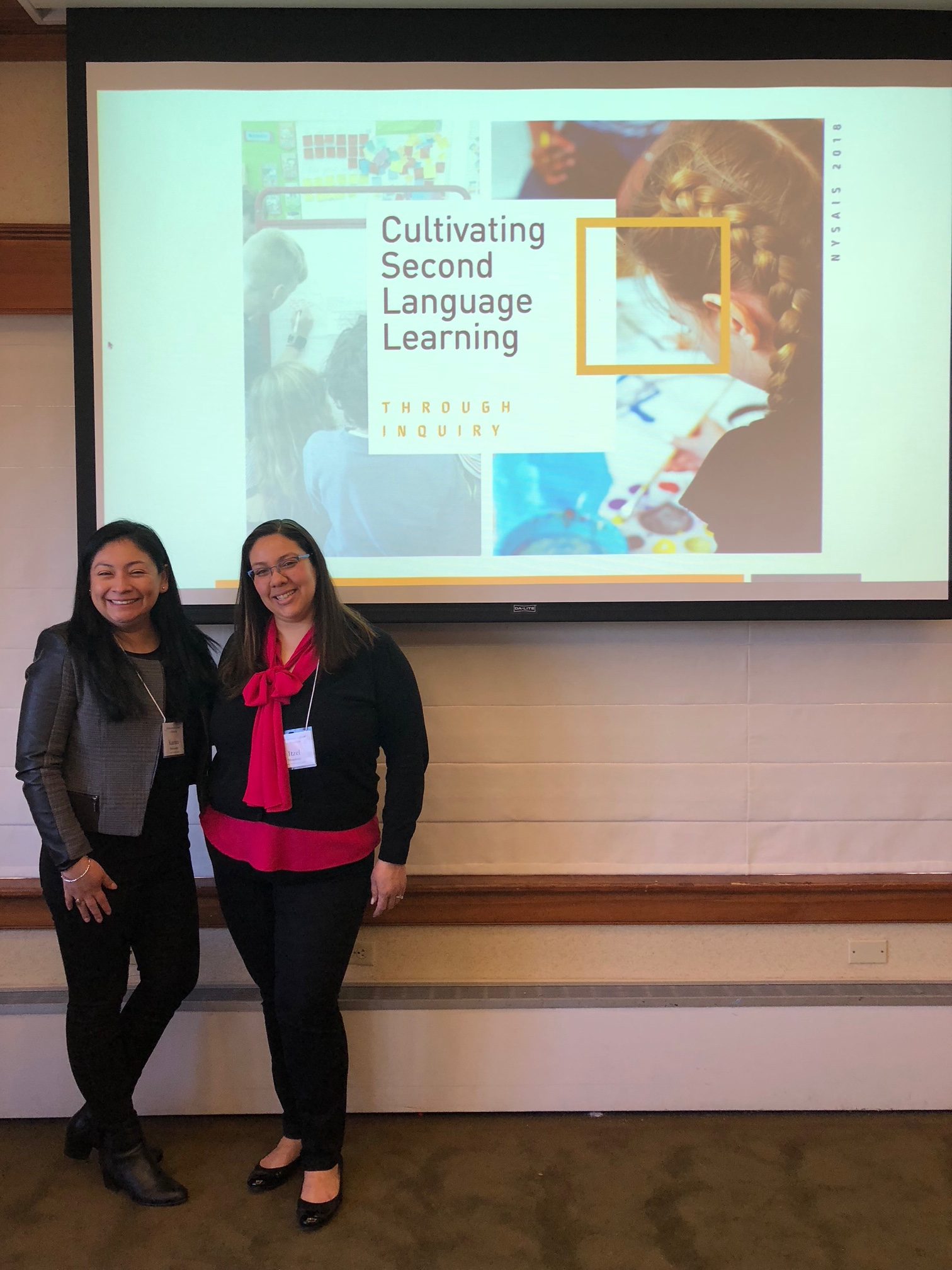 How did you choose this for your topic?

I: One of the challenges that second language teachers face is keeping a child engaged and motivating them to want to learn and use the language. We believe that there is so much that we do here at ISB because of the way that we marry inquiry and language, and the way that we put children at the center of their own learning. As a teacher, once you get to know your student you can find out how to engage them; when a child is engaged, they are most likely to learn. That’s our challenge with languages. It’s so much easier to engage a child when you put them in situations that they are curious about and that they find really interesting.

K: In the older grades, one of the things that language teachers often discuss is getting the students to use the language. One way we get them to do this is through inquiry, allowing the students to build on their own questions and to choose their own way of exploring them by using various materials and feeling motivated and passionate about learning and exploring.

What is something that you value about our inquiry model?

K: I see inquiry as a new model to teach second language. Among other language model pedagogies, I think inquiry is one of the best because it motivates the students. If they want to do something, then they really want to learn the language. When they are so invested in the topic, they don’t even realize that they are learning the language at the same time. When they feel connected to what they are doing and develop a relationship to the content, they are more eager to express their ideas in Spanish because they really feel invested. By the time our students reach 5th Grade, they really can communicate. They can learn, they can read, they can write, they can debate, and they can think in the second language, and to me, this is very powerful. Another thing that I like about using inquiry in the classroom is you can have different language levels in the classroom, and the students are all able to participate in the discussion, no matter what we are talking about. They can express their own ideas at their own pace and be part of the conversation, and get across the main concepts that they have in mind. It’s easier to tackle grammar when your children are engaged, and that is our goal first and foremost. The inquiry model also gives us the opportunity to use authentic materials and to develop cultural awareness for students. Being exposed to the language in the context of news, song lyrics, videos, etc. allows them to build the vocabulary of a native speaker.

I: When I was doing my coursework in bilingual education, I had a colleague who was a Spanish speaker and who had learned Spanish later on in life. When speaking about her experience, she told me that although she had spent years learning Spanish in high school and in college and had really felt that she knew Spanish, but when she went to Spain, she realized she didn’t feel like she could be herself in Spanish. She constantly felt like she was translating. I think that’s a big thing that learning a second language through inquiry allows us to do: it allows the child to be themselves in the target language. They aren’t translating, and they are constantly adjusting and reflecting during their learning experience. Inquiry allows the students to think in a second language. We believe that it isn’t just about having them learn a new language, but having them learn in a bilingual environment. It’s not a routine, it’s not about memorizing vocabulary; it influences their thinking in a bilingual setting, and this is how you can allow a person to feel like themselves in another language and not feel that they’re constantly translating or switching. If you can think in another language, that’s how you can feel like yourself in another language.

What did it mean for you both professionally to be able to share your expertise during this conference?

I: It was an incredible experience, and our presentation was really well received! We had someone say, “Are you presenting tomorrow? Because I’m telling all my colleagues that they should come!”  We both have been here at ISB for a number of years, and it feels really good to represent our school and the amazing work that we are all doing here. Working at ISB has allowed us to be teacher inquirers and to build and reflect on our own journey as bilinguals, which in turn helps us guide our students.

K: I think we do a lot of amazing work here with our students. As a 5th Grade teacher, it’s just incredible to see how far they have come by the time they reach the end of Lower School. We see true results with our students using this pedagogical approach, and it’s something we would like to share with other educators. Our goal was to inspire other teachers to take a risk and present language learning in a new way. The idea is to have other teachers replicate this inquiry approach in their classroom, or at least start with something small. They don’t have to develop a whole new unit but can start with the concept of having students take more ownership of their own learning. It was just amazing to present at the conference, not only for the act of presenting, but also the excitement of saying, “look at the work we are doing at ISB”. It was a moment to step back and see how much we have progressed as teachers. Also, it was amazing and fun to collaborate with Itzel on this!

I: We feel we are walking “inquiry”; Karina and I do a lot of reflecting on the topic, and it’s something that we get very excited about. We really do enjoy the inquiry process, just like the kids! The teacher collaboration here at ISB is truly wonderful. There is a great sense of community among teachers. One thing I’ve noticed is that even when teachers leave ISB, they really miss the school and the work they did here, and they keep it in their minds. It’s a place where you can really have such ownership of your work, and you’re given the space to reflect on your practice. We don’t turn off, and we are always discussing the work that we do with our colleagues.

"Our goal was to inspire other teachers to take a risk and present language learning in a new way. The idea is to have other teachers replicate this inquiry approach in their classroom, or at least start with something small."
-Karina Bustamante 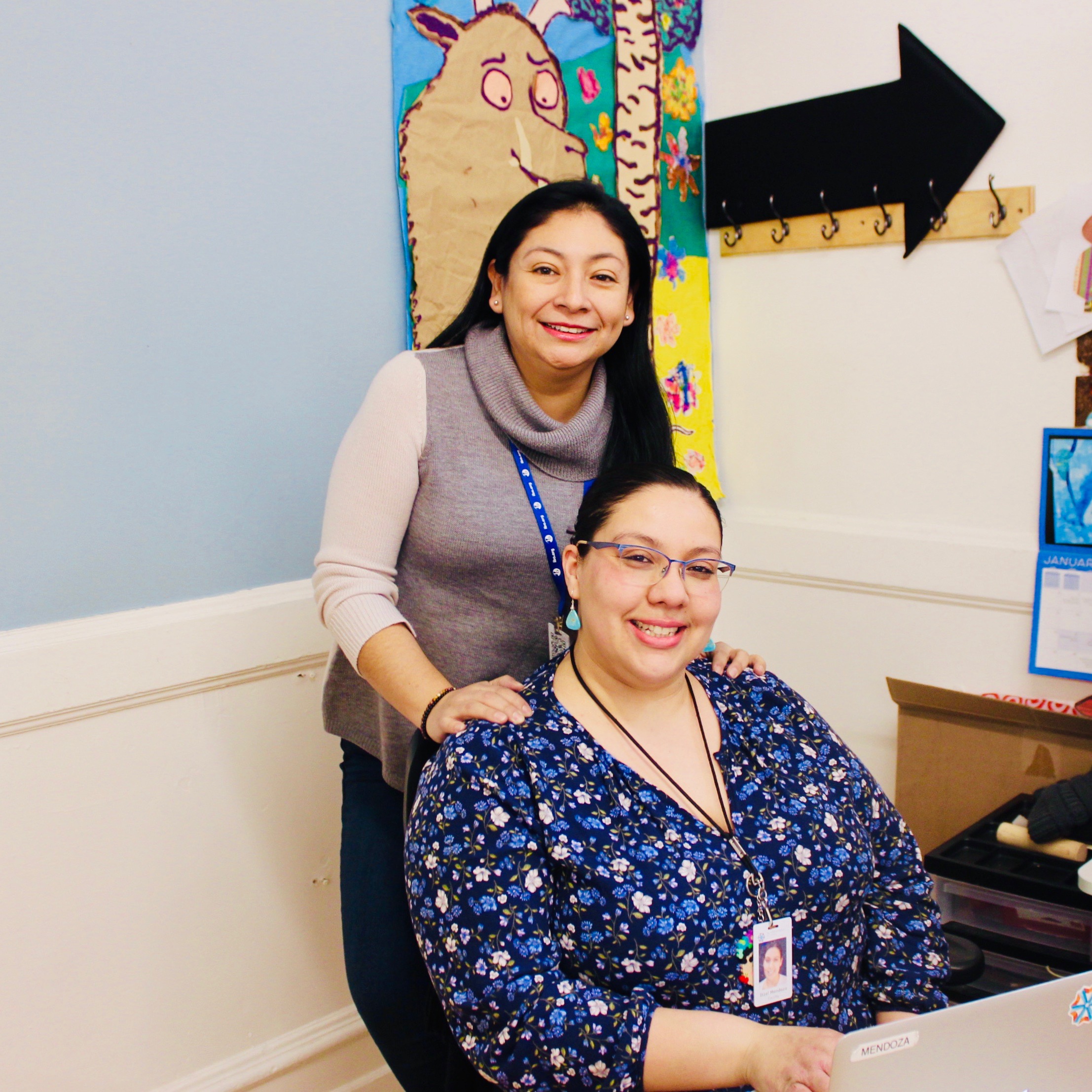 I: We would love to have other opportunities to present at educational conferences and keep sharing the work we do here at ISB. This year we gave a workshop to ISB faculty and staff during one of our staff professional development days, last year we presented at the NYSAIS Global Language and Culture Conference - and we would love for ISB to continue having that presence, of course. After presenting at the school, state, and national level, who knows - maybe next we will be sharing ISB’s teaching philosophy with other educators from around the world!